Lapchi Kang and Milarepa Cave Trek Nepal. A trek to give a full experience of this visually extraordinary and geographically isolated area, hugely rich in flora, wildlife and folklore, yet almost never visited by tourists or scientists. Lapchi Kang is a small Himalayan range lying like a twisted backbone jammed between the road to Tibet and the huge himalayan valley of Rowaling Himal. It is restricted and tucked away enough to be ignored by the tourists and yet not high enough to entice mountaineers. Somewhere in this isolated wilderness, Milarepa-an ancient Tibetan magician, went into retreat, lived in a cave, ate stinging nettles and slowly turned green!

The maze of twisted hills, rock spires and sheer cliffs that make the landscape from Ama Bamare Himal to Lapchi Karhka gives the snow leopard a perfect habitat for survival. This trek follows the Tama Khosi river from Jagat to Lamanabagar where we turn off the main trail and head up through dense bamboo and cloud forest to an isolated pocket of Lapchi Kang under the unclimbed rock spire of Ama Bamare and the awesome rock face of Kookur Raja Darra ( King Dog Ridge ). This Lapchi Kang Trek is unique !

Day 2. Lamabagar – Jum Khola – Lapchi Khola river (2400m) The trek takes us across the Lapchi Khola and up an incredibly steep path through the bamboo forest. The path twists through dense vegetation and steep stream gullies as we wander high up on one side of the gorge opposite the furious tributary of the Chandu Khola. We cross the Jum Khola by bridge on the Tibet border and then the Lapchi bridge and camp along the valley floor next to the river.

Day 3  / 5. Lapchi Khola – Lapchi Village (3379m) We follow the fast flowing stream under the shadow of Gaurishankar (7134m) to Lapchi Village. You can visit Lapchi Monastery and about 14 houses. Yak herding is the main occupation.

Day 6. Explore Lapchi – we can walk into the mountains and view Himalayan Thar (and Blue Sheep if we are lucky). Maximun altitude 4300m. At Lapchi Village the river splits into 2 – one comes down from Lapchi Chuwa where Milarepa died (it is now a Chinese military camp in Tibet), the other river on the right comes from Nyalam and is still the main supply road for the yak-caravans from Tibet-China. (Nyalam means road to hell !) There’s a very nice walk up Lapchi mountain, but we have to ask permission to go up, On the mountain slopes are the retreat houses for the 3-year retreats. There are 4 Gompa houses in total, the one down at the monastery is called Duedul Pug, Choera Gompa is the next, in the middle temple, Rechen Gompa, are the footprints of Milarepa on the ceiling. Blue Sheep live around this The highest temple, Ze Pug, where there is a water well – the water started flowing when Milarepa struck his staff to the rocks, and then he flew to Mt.Kailash. On the way up is a footprint of a Dakini, one of the Tseringma sisters, a long time cohort of Milarepa.

Lapchi Village – High Alpine Lakes (4900m) A steep hike up grassy slope where we find a series of small alpine lakes with fantastic views down the Lapchi valley towards Lamabagar. Surrounded by snowy mountain views and a small glacier, we camp the night.

High Alpine Lakes – Kharka ground (3424m) We back track for a while and turn into the vast forest under the rocky ice spires of Choba Bamarie and King Dog Mountain (Kukoo Raj), looking like a huge sitting dog with pointed ears !

Day 9. Kharka ground – King Dog Kharka (2800m) across King Dog ridge (3386m) A steep forest walk to the top of a vertical face overlooking the Chandu Khola far below. There is actually a path that runs diagonally across the cliff face big enough to heard yaks down. We camp in a clearing in the forest across the river.

Day 10 / 11. King Dog Kharka – Ama Bamare Base Camp (4500m). Ama Bamarie means Mother mountain and local folk lore tell of other peaks – Deodunga, King Dog, Kalinchowk, Saart Patri, Konsu – and the relationship between them. We walk up the Chandu Khola towards its glacial source under the huge rocks of King Dog cliff and Mountain. We turn left up through some forest and onto open ground and camp under the vertical rock spire of Ama Bamaire or Mani Himal (5940m) as it is known locally. Here we are in a small valley, totally cut off and remote.

Day 12. Ama Bamarie – Saart Patri Khola (4200m) A high alpine walk through grass and juniper. Fantastic views into Tibet and of Gaurishankar, Mani Himal and King Dog. We camp along side the Saart Patri Khola stream.

Day 14. Juniper Camp – Dark Rock Camp (4200m) Steep hike up and crossing a ridge (4500m) before twisting down through scrub and boulders to a small campsite under some black rocks.

Day 15. Dark Rock Camp – Thabu Pokhari Lake (4500m) – Yak Kharka (4000m) A short steep walk to this small holy lake, fluorescent green in colour and the site a sacred festival once a year with the Lamas from Lapchi and Lamabagar. We may see Blue Sheep here. We cannot camp in at the lake or make any noise and continue a steep stream gorge to the open fields of Yak Kharka.

Day 16 . Yak Karka – Lamabagar A long walk down in the forest ! We camp at another very small holy lake where the forest begins. Black bear, snow leopards and foxes are present in the area. The path follows an amazing gushing pristine alpine stream.

This is a full camping trek: prices are per person based on 2 sharing a tent. 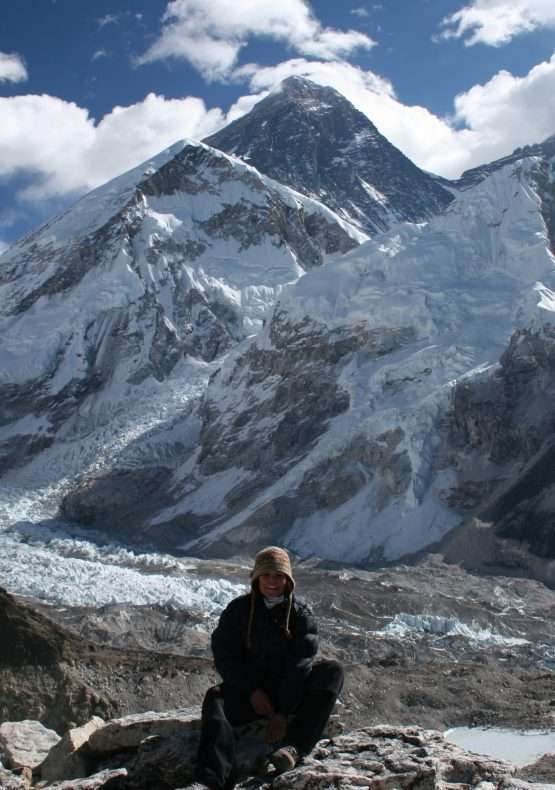 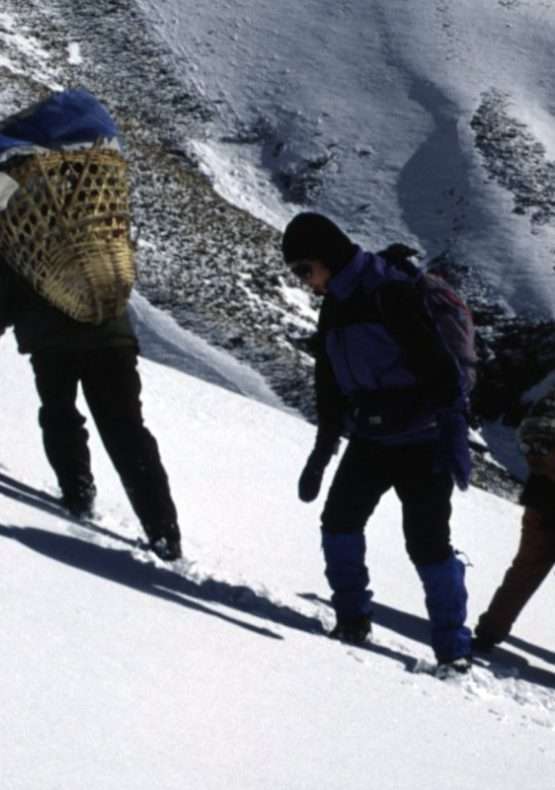 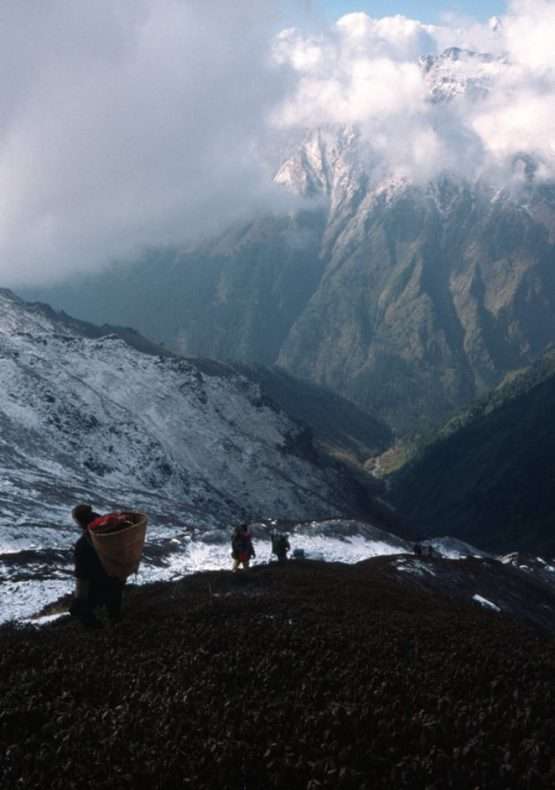 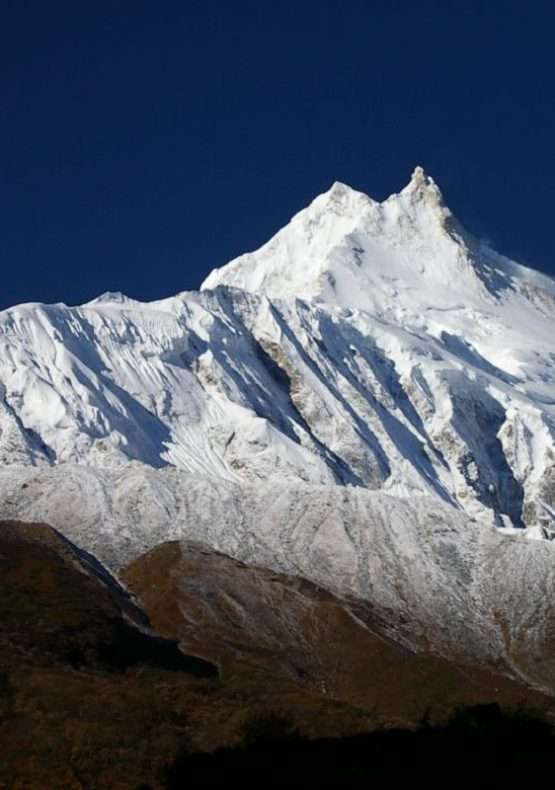